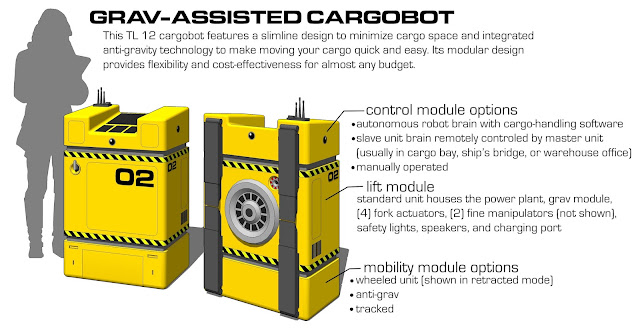 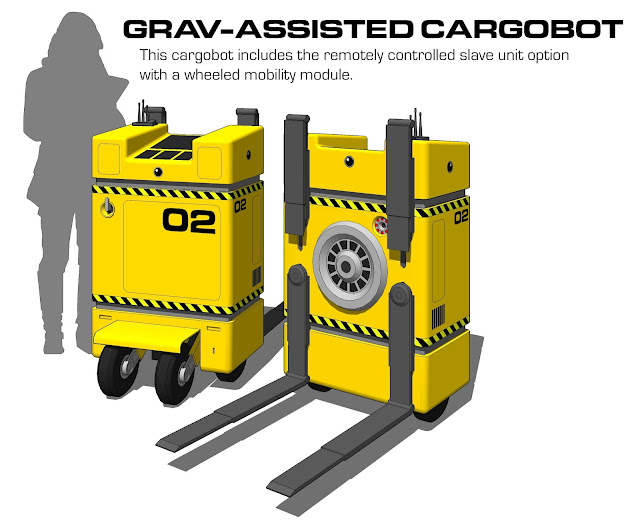 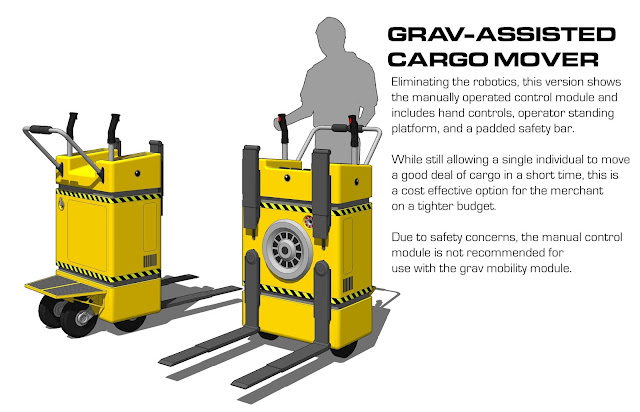 This was inspired by the grav-assisted APC in one of my old Traveller books (but for the life of me I cannot find it - I just remembered something like "imagine a tank moving at Lamborghini speeds...). So the idea is the cargo bot has an anti-grav module to make the cargo lighter and therefore easier to move around. I provided several different options from what I remembered from Book 8 - Robots, but am past my days of gearheading all the small details and counting credits. I figure the these would run from about 80KCr for the manually driven cargo mover up to 200KCr for the grav version with all the bells and whistles.

I created and really liked an image of a grav cargobot holding cargo from above, like some flying beast with prey in its claws, but then I started thinking about the anti-grav cargo module contradicting the effects of the anti-grav mobility unit. It made my head hurt. I eventually remembered this is all fiction and decided anti-grav fields could run the same way or perpendicular to each other, but not in opposite directions, hence the last image with the robot below the cargo.

Finally, this is a strong attempt of mine to stay away from anthropomorphized robots. I like Star Wars as much as the next guy, but after Wall-E and BB-8, the cute robot thing is starting to get to me. This is my push back with the cargobots just being sophisticated equipment. No vocoder, although it does have an audible warning system. It communicates via text with the user through the ship's computer, the user's hand computer/datapad, or the screens on the center of the control unit.
Posted by Robert Pearce at 2:15 PM 6 comments:

There's been some confusion as to how the restroom in the Captain's stateroom works. It's a shower-sink-toilet combination like you might see in a motorhome, only jacked up with TL15 wizardry. No offense meant to any tri-valves out there.
Posted by Robert Pearce at 9:54 PM 3 comments: 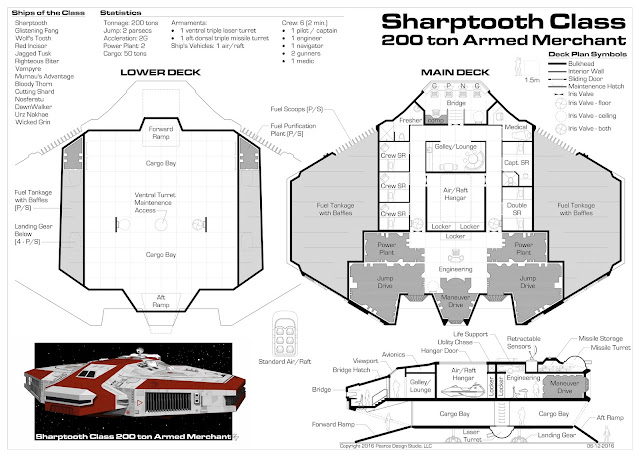 Finally finished the deck plans and section for the Sharptooth Class Merchant ship. I'd still like to put some polish on it, fix some line weight issues, jazz up the image overall, add more (and more creative) ship names. but this will have to do for now.

For a higher resolution PDF, click this link: (Traveller Starship Deck Plan Sharptooth Class). It was created to be printed out on 30"x42". Scale is 1" = 5'-0" so it can be used with 25mm miniatures. Enjoy!