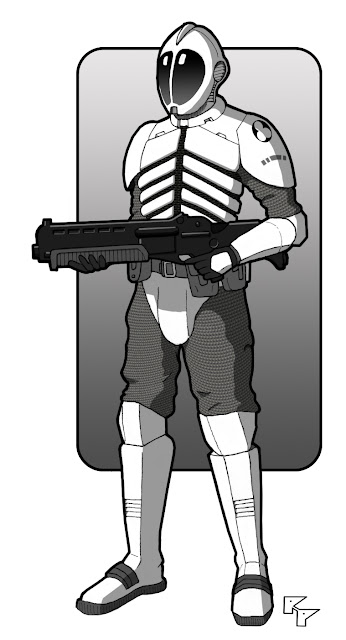 Essentially a stripped down version of the standard non-powered trooper armor, Zhodani light combat armor eliminates the upper arm and leg armor and utilizes a ballistic cloth body suit. The armor is not suitable for use in vacuum and sacrifices some protection for lighter weight, lower cost, and increased maneuverability. The armor can be augmented with the typical accessories and equipment. (See Alien Module 4 - Zhodani p. 16).

The armor is favored by troops who expect light combat or combat by lower tech combatants and is often the preferred armor for garrison duty and for patrolling civilian areas under occupation.

When time is available, I run a solo exploration campaign past the edge of Imperial space. Since the crew won't necessarily have a dependable source of health care, the corporation funding the expedition has arranged to supply the ship's medic with a plethora of drugs; some legal, some not, some tried and true, and some experimental.  The ship's medic was given a cursory training on the effects and side effects of each drug. Drugs are in a variety of forms (pills, liquid, injection, inhalant, etc.)

This isn't meant as any in-depth review of use of pharmaceuticals in a Traveller game, more just rough notes for my campaign.

Vaccines - standard inoculations that may the ship's medic may require crew members have before visiting a planet, or that the planet may require of new visitors
Anti-toxins - a variety of generic drugs to combat flora and fauna which may scratch and bite
Antibiotics – decrease severity of illness and increase healing

Slow Drug - So named because it makes the universe (from the user’s viewpoint) appear to move more slowly, the drug achieves the effect by accelerating the user’s metabolism. In effect, the user lives approximately twice as fast as normal. Slow drug takes effect 45 seconds after ingestion and continues to function for about 10 minutes. At the end of its effect the person is extremely fatigued and must recover from that fatigue. A person under slow drug (because he or she is living at twice the normal rate) can make twice as many actions or move twice as far as normal.

Medical Slow Drug - A medical slow drug is also available, which is used to hasten recovery from wounds or illness. One dose causes unconsciousness and the passage of thirty days equivalent recovery time in one day. During this period, ordinary healing takes place. No wounds are received from the use of medical slow drug, but the individual is unconscious or semi-conscious while under its influence.

Fast Drug - So named because it makes the universe (to its user) appear to move much more quickly, the drug slows down personal metabolism at a ratio of approximately 60 to 1. Users are extremely vulnerable while living at such a slow rate, but physical aging is also slowed, and the need for consumable supplies is reduced which thus allows conservation of air and food. Fast drug takes effect immediately upon ingestion. One dose lasts for 60 days, making that time appear to be only one day. An antidote is available to end the effect before 60 days. Fast Drug (TL9 - 2,000 Cr), Fast Antidote (TL-12 - 900 Cr)

Combat Drug - Taken by fighters (usually military personnel) prior to combat, this drug increases personal strength and endurance. The effect begins 30 seconds after being taken and lasts for about 10 minutes.

Anagathics - Anagathics or Antiagathics are longevity drugs, usually a mixture several compounds. They help prolong life and prevent aging in Humans. A regimen of regular monthly doses enables an individual to ignore the debilitating effects of advancing years. They need to be used starting at the age of 30, and with luck, the user may reach an age of 100 or more before old age affects the user. Because of the rarity and demand for anagathics, they are quite expensive and are often unavailable at any price. It takes a while for the total effects of anagathics to be felt; it also takes a while for the effects of anagathics to totally go away. However there are withdrawal effects from interrupting the supply of anagathics. Obviously, anagathics are most effective if they can be taken long-term without interruption. A continually interrupted supply can have devastating effects. Anagathics have dangerous side-effects on some users and often anagathics users take extra risks to maintain a constant supply. Society generally frowns on nobles who take anagathics.

Truth Drug - Drug used to compel individuals to answer interrogation truthfully, one dose is sufficient to assure truthful answers for approximately two minutes, after which the user experiences one hour of unconsciousness, then becomes groggy and unresponsive for several hours.

PSI Drugs - Chemical means are available to enhance a person's Psionic Strength on a temporary basis. Because the general public attitude towards psionics is negative, psi drugs are expensive and are extremely difficult to obtain. These drugs are as follows:

Non-canon drugs:
Pep drug - a special stimulant available in pill form which holds back all need for food or sleep for 12 hours. The user feels rested and alert, and all of his reactions are as normal. Pep also has the ability to negate the effects of damage—the user will not fall unconscious when a characteristic is reduced to zero; he can continue to fight after his endurance is used up; he will act in all respects as if no damage was taken. Once the Pep wears off all damage effects will return, and the user will take an additional 1D damage.

Sleep Drug - A tasteless water-soluble pill, sleep drug puts its user into a deep dreamless sleep that lasts for 12 hours. nothing will wake the user during that time. Sleep drug takes 10 seconds per point of the user's endurance to take effect (i.e.: someone with END 7 will take 70 seconds to succumb.) TL5, Cr 20 per dose.

Sober Drug - These pills will immediately cancel out the effects of alcohol or narcotics, making the user sober. It is quite useful in the event of combat after a hard night's drinking. TL8: Cr2 per dose, usually in boxes of 10.

Knowledge Drug - not actually a single drug but a dose of RNA and a nootropic drug combination that can teach the user new skills and knowledge. Each injection can be used to teach one specific skill level, or 3 injections can be used to increase the user's education by one. Education cannot be increased above 15, and the total skill level limit of intelligence plus education still applies. Knowledge drug injections must be administered into the Cerebrospinal fluid by someone with medical skill to take proper effect. After the drug is taken the user enters a state similar to catatonia, during which his mind assimilates the data. The player must then roll his intelligence or lower on 2D to leave this state after 2D days. Otherwise he remains catatonic permanently.

Byphodine - A drug which can induce a state of reduced metabolic function. Unexamined, a person under the effects of Byphodine is easily mistaken for a cadaver (Firefly).

Interfectum - Painkillers that take the place of first-aid kits, capable of keeping a man alive and able to function even after numerous gunshot wounds. (Max Payne)

Lethe - Powerful drug developed to blank (or possibly just interfere with) memory so rejuvenation patients do not remember feeling pain or other problems associated with the treatments. Lethe ("forgetfulness") induces total amnesia. The subject loses all memories of everything that happened before the dose was administered. The base duration for this memory loss is 4 weeks. At the end of this period, the subject makes a roll against INT-2 each week to shake off the effects. On a successful roll, the subject's "lost" memories come flooding back. On a critical failure, the memory loss has become permanent; the character is considered to have acquired the Total Amnesia disadvantage, and can only buy it off with character points. (GURPS)

Oblivio - (Latin for "forgetfulness") is chemically very different from Lethe, and induces temporary retrograde amnesia. For each dose – to a maximum of four doses – the drug temporarily wipes out 3d6 weeks of the subject's memory record, starting at the moment the drug was administered and counting backwards. Thus, if the subject is given three doses, he forgets everything that happened in the 9d6 weeks before the drug was administered. The drug also renders the subject instantly unconscious for 10d6 minutes.

The drug has a base duration of 1d+6 days. After that period, every day the subject attempts to roll INT-2 or less on 2d6. If he succeeds, and his memory comes back immediately, although in most cases he will never recall the period one hour before the drug was administered. On a natural roll of 2, however, he does remember that one-hour "window." On a natural roll of 12, the temporary amnesia becomes permanent.

The maximum number of doses that can be administered at one time – safely – is four. A fifth dose requires the subject to make a INT-4 roll or become comatose for 20-INT hours, and suffer 3d damage plus 1d of additional damage for each dose after the fifth.

Agents will sometimes want to maintain this kind of temporary amnesia beyond the base duration. This requires multiple administrations of Oblivio. Each time the subject receives the drug, the GM must secretly roll the base duration for that particular administration (i.e., 1d+6). The number of doses he received in that batch is considered to be still in effect for that time. If he receives more doses before that time is up, to bring the total number of "active doses" up to 5, the subject will suffer the effects of an "overdose" as described above. (GURPS)

Triox - used to enrich the body in oxygen for use in environment poor in oxygen. (Star Trek). Variants of this drug may be used on planets with thin and dense atmospheres in lieu of breathing apparatus. Tainted atmospheres will still require a filter of some sort.

Brilliance - An illicit drug (contraband) which acts as an intelligence enhancer. (Privateer)

Additional thoughts:
Posted by Robert Pearce at 11:49 AM 2 comments:

I've still been too busy combating the forces of evil (i.e. "real life") to make any new progress on the Starship Geomorph book, so here are a couple geomorphs of a simple cargo bay - one full of cargo and the other empty - to tide you over.
The illustration depicts a common scenario many Travellers might have experience with - the critter infestation in the cargo bay - and the stalwart ship's security agent about to have a close encounter. 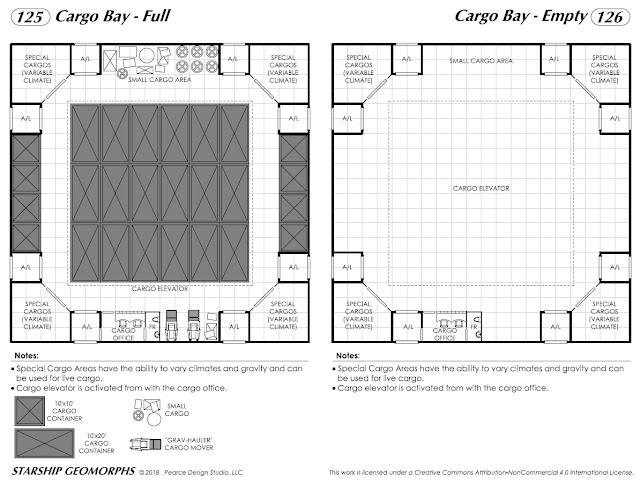 The insect model was created by ShinbiHAJI and can be found at the SketchUp Warehouse.
Posted by Robert Pearce at 11:33 PM 7 comments: