Space Jerks - The NSFW Classic Traveller Podcast
In honor of the new kids on the Traveller podcast block, I wanted to throw a shout out to Space Jerks, who released their first episode yesterday. There are some good, groan-worthy puns: "I'll buy shots first" states one player, while visiting a Star Wars cantina-themed bar (get it? "shots first"!). If you like your podcasts sprinkled liberally with F-bombs and other adult language, give them a listen. (1 episode so far)


The Behind the Claw Podcast
I came across this one late in the game and just as I was getting into it Felbrigg stopped producing them. Definitely worth a listen. (33 episodes)


Happy Jacks RPG Podcast
Among the many games they present is a Star Wars campaign played with the Mongoose Traveller rules. (13 episodes of their Star Wars Traveller game and many, many others)


Fear the Boot RPG Podcast
Not related to Traveller, but this is one of my favorite RPG podcasts. Producing regularly since 2006, they've covered just about every RPG topic imaginable. (475 episodes and counting)


What Are Your Favorites?

These are only a few of the many I've watched or listened to over the years. I've tried to focus on those content creators who have produced more than just one or two episodes. Am I missing anything? What are your favorite RPG related podcasts and videos?
Posted by Robert Pearce at 5:09 PM 2 comments: 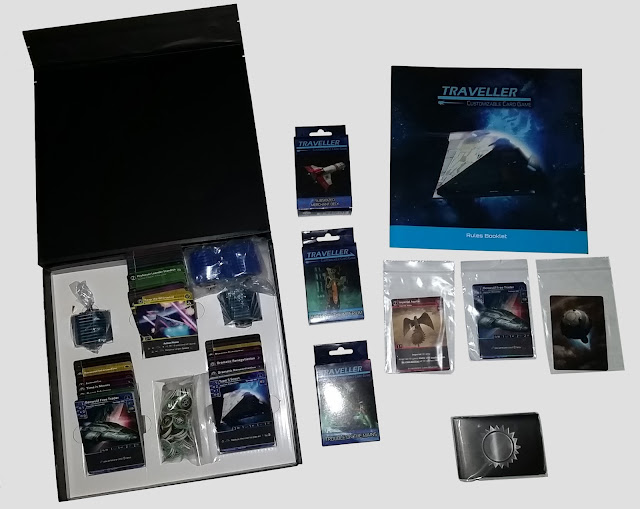 Just got this in the mail this week. This is the Collector's Edition with the additional Subsidized Merchant, Aliens of the Imperium, and Trouble on the Mains decks. I'm pretty impressed with the quality. I haven't had time to really go through it all and learn how game play works. Congratulations to Jeff Yin and Horizon Games for their successful Kickstarter campaign and for surviving the production process!

Some of the artwork from my blog even made it into the game. Woohoo! I've officially left my mark on the Traveller universe. Now if I can just keep the BuffBot from going haywire!
Posted by Robert Pearce at 1:33 PM 4 comments: