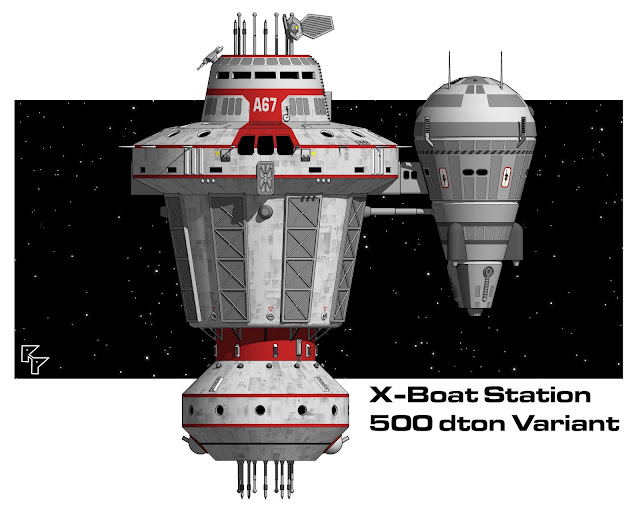 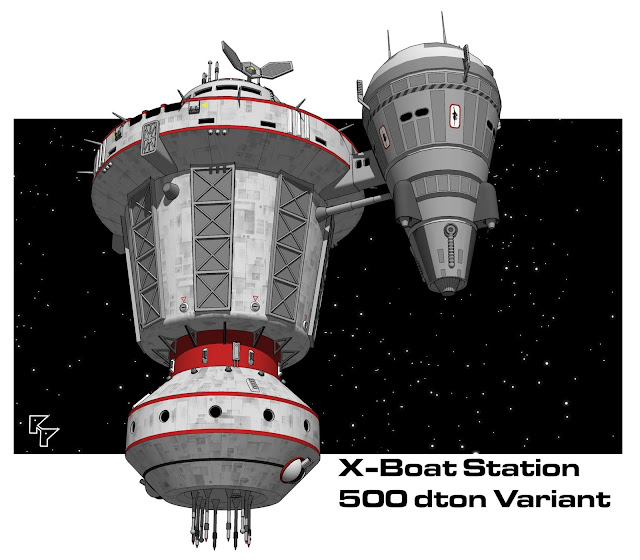 A blog reader wrote to me inquiring about modifying the X-Boat Station to include additional research, observation, repair and maintenance, and traffic control spaces as well as armaments, and asked about the possibility of adding a ring around the station for those purposes. While it would be possible to design such a ring, I would be concerned that a ring might interfere with ship docking, and suggest the above images as a possible variant.

This design adds a 100 dton mass to the bottom of the station and assumes the elevator and ladder run through the central fuel storage to access the new lower decks. With the overall station now being 500 dtons, some of that space would need to be used for additional drive, power plant, and fuel to maintain the original station specifications. Alternately - and depending upon the gamer's intended use - the additional drive and fuel requirements could be ignored and argued that the station maneuvers at less than 1G.

The new mass consists of four standard height decks (10' or 3m) with two rotating turrets and sensors projecting from the bottom. A third rotating turret has been added to the upper portion of the structure to take advantage of the three allowable "hardpoints" (IMTU hardpoints do not have to be fixed, but can be set upon tracks for better coverage).

With the extra tonnage, the station can start to move away from being strictly for X-Boat usage and could become a general multi-purpose space station, albeit a pretty small one. Other uses are as varied as your imagination: a noble's off planet getaway, a research station, a manned interdiction satellite, a small trading post...whatever you want. Enjoy! 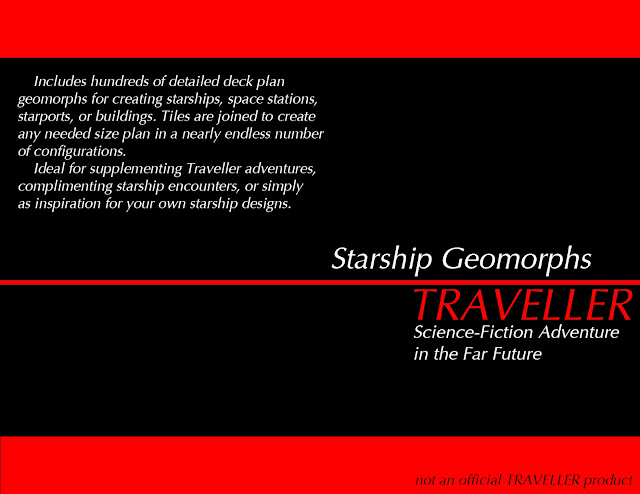 The proposed book cover. I've always loved the classic LBB design.
I'm hoping since this is a fan-made freebie that Marc Miller will see beyond any copyright infringement.

While not part of a typical Traveller starship, the Agricultural Bay is a mainstay in science fiction for colony ships, inhospitable planets, and remote outposts obligated to be self-sufficient. By itself, gardening doesn't necessarily scream "action and adventure", so referees should consider all the myriad ways plants have been used in classic science fiction and modify as they see fit. The seed pods from "Invasion of the Body Snatchers", the alien spores from Star Trek's "This Side of Paradise", and Triffids are all fine places to start. Live crops and seeds can be valuable trading goods on some worlds, and are often a favorite target for customs officials. Ignoring transport protocols is sure way to introduce and invasive species into a new environment. Knowledge of alien botany could be a useful skill for a Traveller. Which ones are edible? Which are poisonous? Which are used to make medicine? Use your imagination and have fun!
Posted by Robert Pearce at 9:59 PM 5 comments: