N is for Non-lethal Weapons 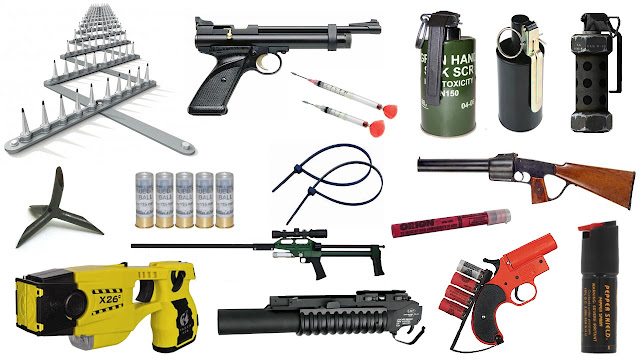 "Who but a puppeteer would go around with a weapon that does good to the enemy?" - Louis Wu, Ringworld

The Traveller universe is a dangerous place. Whether it's claws, blades, modern slugthrowers, or high tech energy weapons, it really doesn't take to much to neutralize the average Traveller character.

Early in my gaming career, when I finally got the grasp of combat and had a character with a decent sub-machine gun skill, I kind of went in "rampage mode" for a while. I'd kill with abandon, often occasionally upsetting the referee's game plan by shooting an enemy NPC rather than sneaking around him or talking to him. The SMG was my hammer and every problem I came across was a nail. Brian, our wise referee and gaming mentor, finally took me aside and told me that combat was a two-way street. If I continued to shoot everything that moved, the enemy might decide to take the same approach to my character. "Don't kill all the guards, and maybe they'll show you the same courtesy if they catch you." In a game where it's easy to die, I was given the advice to take a different approach and live a little longer. It was good advice, and opened the door to much more varied gaming experience. It wasn't long before my characters were using diplomacy, bribery, carousing, and DEX rolls (stealth) to achieve their goals without firing a round.

I think it was Star Frontiers that introduced me to the tangler gun, and about that time my younger brother, who worked for the police department, bought his first taser. The two events got me thinking about non-lethal weaponry and how they could be used in Traveller. Over the years I incorporated a few non-lethal weapons into my games, but never really formalized anything. Aside from a basic "to hit" mechanic, non-lethal weapons are more about effect, and less about damage, with an occasional "saving throw" option to keep it interesting.

There are a wide variety of real world, non-lethal weapons you can incorporate into your games, and they can be found at every tech level. A quick note about nomenclature: I realize that some people prefer the term "less lethal" for weapons of this nature and I understand why. When I hear in the news of those few occasions where a police officer tases a suspect and the suspect dies, I can't help think that either the officer rolled a natural 12  to hit or the suspect rolled a 2 on his END save. Role playing games have, in some ways, given me a very distorted view of the world. Regardless, for the sake of this discussion I am sticking with the term "non-lethal".

Types of Non-lethal Weapons
Non-lethal weapons may have one or more of the following effects:

Real world weapons in development but not widely used include:

Non-lethal  Weapons and Vehicles
There are also weapons that can be used against vehicles that generally will not harm the occupant:

Non-lethal Weapons and the Law
Not all non-lethal weapons are legal or considered ethical. The use of blinding weapons (permanent eye damage) and many chemical weapons will be deemed unethical, even though they don't kill.

Many of these weapons might have multiple uses. One of my personal favorites, and standard equipment IMTU is the expanding foam grenade. When detonated near a human target it covers the person in a foam that expands to render them immobile. They can be used in starships to block corridors, or tossed in a vehicle cockpit to quickly make the vehicle unusable. As a last ditch effort it can be used to patch small hull breaches.


Enjoy, and let's be careful out there!