In Part 1, I showed you an overview of my gaming spreadsheet and went into some detail of the NPC generator and  planetary system generator/details. This time I'll focus on the Weather/Event, Animal Encounters/Bestiary, and Reconfigurable List Of Many Things portions of the spreadsheet. 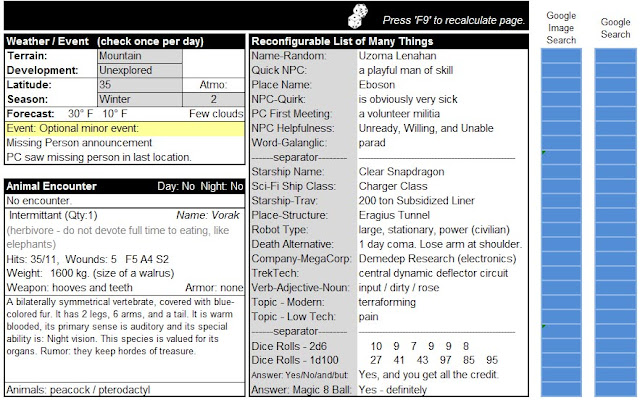 Weather/Event
Weather is something I often overlook in gaming. This is a simple temperature and weather generator based on the terrain type, level of development, latitude, season, and atmosphere. It is not very sophisticated, but each portion adds modifiers which affect the outcome. The output is daily high and low temperatures and sky conditions.

Each terrain type also includes four randomized custom events. Terrain events follow the rules per Supplement 2 - Animal Encounters, so an event occurs on a roll of 10 on 2d6. If no terrain event occurs, an optional non-terrain event is picked at random from a growing list - currently about thirty. All events have a description and a brief note on how it affects game play.

Animal Encounters / Bestiary
The Animal Encounters basically duplicates information found in Supplement 2. It checks for encounters twice per day (daytime and nighttime) and determines surprise and initiative. If the animal has surprise it lists what the animals first action would be. The initiative roll is not terribly sophisticated as it does not take into account things like PC party size, PC party vehicle, general PC noise level, animal camouflage or stealth, etc.

The spreadsheet generates an animal whether or not there is an encounter. Animal stats are generated per Supplement 2 and generation is tied to the terrain chosen in the weather generator. A random animal description is provided and includes any special abilities the animal may have, what value if any the animal may have, and rumors about the animal. The arms and legs portion needs to be re-written, as I am almost always disappointed with the results. Finally, the table generates two real world animals to be used as additional inspiration.

Reconfigurable List of Many Things
Probably the biggest workhorse of the entire spreadsheet, this list started out as the List of Many Things, and got it's name from the famous D&D magic item, the Deck of Many Things. I needed a place to generate short, simple answers to short simple questions. It initially started out as a static list of about a dozen items; character names, place names, random words, dice rolls, etc. Over time the list just grew and grew. Pretty soon the list was limited to the height of my monitor display and I had to convert the list from static to a pull-down menu style interface.

This actually worked out well because now the desired information can be grouped together based on most frequently needed information. For example, when solo gaming I need a lot of 2d6 and percentage dice rolls, as well as random answers to Yes/No type questions, so I keep the bottom portion of the list dedicated to those types of answers. For those of you who are gluttons for punishment, I've included a list of all the items in the list, which has now grown to over 240 items (see image below). There are two columns of blue buttons to the right of the list, for doing Google image and information searches. I've found this to be extremely useful.

There's really nothing special about this part of the spreadsheet. It is mostly just a bunch of text lists and simple random generators. Much of the information was derived from information or ideas found on random generators all over the web. What I like about my version is that 1) I can customize it, 2) I don't have to keep track of dozens of websites, 3) I don't need to be online, 4) I can continually add to it, and 5) everything is in one location.

I'd be remiss if I didn't tip my hat to all the random generator creators out there from whom I borrowed, stole, or was inspired by. In particular I want to point out the following:
Check these out if you haven't already.

I've been asked by several people if I would be willing to share this spreadsheet. I would really love to as I find it a great resource. Unfortunately, when I started this I never thought it as something others might be interested in. As a result, over the eight or so years I've been putting this together I have been including a lot of copyrighted material, ideas for which the original creators should get credit, and in generally just kept adding to it without any kind of goal in mind. The spreadsheet's "home page" is as cleaned up as I can manage, but the behind the scenes data is a mess. Hopefully someday I will have time to either delete or rewrite the copyright material and clean it up enough to feel comfortable with sharing it. 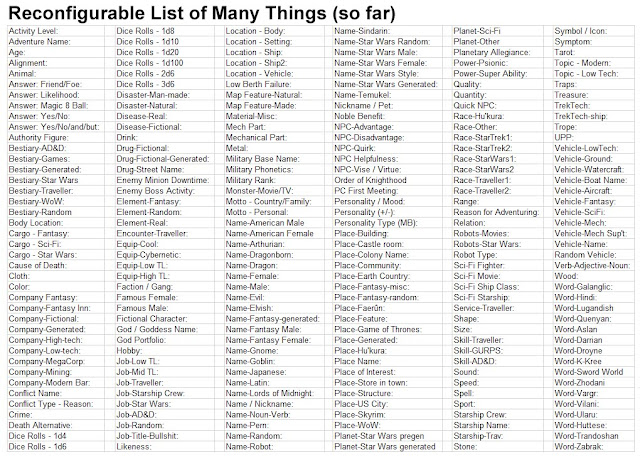 Posted by Robert Pearce at 4:00 AM