W is for Warbot 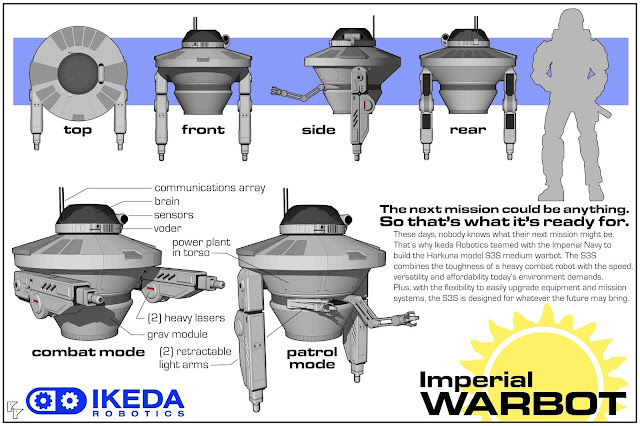 
Similar in size and form to the Zhodani Tliazhashal PP04 medium warbot, the Harkuna model S3S by Ikeda Robotics is designed to be quickly reconfigured in the field to serve a wide variety of mission roles. The standard combat package includes two heavy energy weapons, usually heavy lasers, PGMP-13s or FGMP-14s.

The base model includes a basic sensor package but can be upgraded with just about anything desired. For reconnaissance missions, the heavy weapons can be swapped out for a recon mission package which includes densitometers, neural activity sensors, PRIS optics, and other miscellaneous sensors.

Two retractable light arms are located in a 360 degree swivel mount in the lower torso and are capable of handling any standard human tools or weapons. Between combat operations, the heavy weapons can be replaced with heavy work arms to facilitate field base construction and supply relocation.

For spacecraft operations, the S3S is designed to be able to go just about anywhere a soldier in battledress can go. Standard doors, airlocks, vertical hatches, and elevators are all accessible to the warbot.

At TL 15, and with the proper resources, this robot can switch out its own hardware and software to meet just about any mission requirement.

Civilian use
Most worlds view a warbot much like any other weapon, and as such they are restricted by local law level. Warbots used as personal body guards are not unheard of, but such use is rare. Actions taken by a warbot are the responsibility of the owner. Stripped of it's weapons and associated programming, the standard warbot can be reconfigured for a wide variety of non-military uses.

The Adventures of JON-E Warbot
The Adventures of JON-E Warbot, was a wildly popular children's animated tri-vid series produced in the early 1090's. The show followed the exploits of a stern voiced and duty bound E-series combat robot and his skilled, but trouble prone robot technician, Clark "Skippy" Weston. Being a children's show, there was never any overt violence against humans. Many of the adventures focused on rescue and humanitarian missions. When combat operations were presented they either featured stun weapons or were against enemy robots. JON-E's famous catchphrase of "Kerpow, kerpow!" spread to all corners of the Spinward Marches.

Funded by Ikeda Robotics, the show's critics labeled it as pure propaganda and a recruitment tool for the Imperial Navy. The show's antagonists were thinly veiled Zhodani, but never called such. There is speculation that the show stirred anti-Zhodani sentiments and glorified war, at least in the eyes of impressionable children, and possibly helped to expedite the start of the Fifth Frontier War.

Fan favorite episodes include "Skippy and the Brain Pirates", "The Return of Dr. Dredzliar", and the heart-breaking "Flowers for Sargeant Goodfellow".

"I was always very proud of that show", said Galt Trydine, retired public relations executive for Ikeda Robotics. "We had actually produced a combat model very similar to JON-E, and it's capabilities were pretty faithfully represented in the show. The voders at the time were never quite able to capture the smugness of the voice actor, but I heard some fans created vocal patches that do a pretty good job of it."
-----------------------------
For additional reading about warbots, check out Classic Traveller Alien Module 4-Zhodani and Book 8 - Robots.
-----------------------------
Posted by Robert Pearce at 8:52 AM