P is for Personal Re-entry Pod

Personal Re-entry Pods go by many names: jump capsules, drop capsules, drop pods, escape pods, Human Entry Vehicles (HEV) or HEV Pods, Orbital Insertion Pods, or for those of you not into the whole brevity thing; Single Occupant Exo-atmospheric Insertion Vehicles (SOIEV). Regardless of what they are called, they are all designed to do pretty much the same thing; get a single passenger from a ship in orbit safely to the ground.

I first remember reading about jump capsules in Robert A. Heinlein's Starship Troopers. The beginning of the book starts with a description of the "cap" (capsule) troopers making a drop from their ship to the planet below. Exciting stuff, and I was disappointed when the film version was made and it didn't include the capsule.

Generalities
The basic personal re-entry pod requires no skill to operate. Flights and landing coordinates are pre-programmed allowing the passenger to just enter the pod and activate a single, clearly marked button to launch. Historically, drop pods have a relatively high casualty rate, but improvements are always being made. The pods shown include stabilizer fins to reduce atmospheric turbulence are coated with a ablative ceramic coating to reduce heat. A small grav unit used to achieve a relatively soft landing and makes the pod usable in any atmosphere or any size world. Pods are reusable, but are unable to reach orbit on their own. The must be retrieved and re-outfitted to be used again.

Military Use
In the military, drop pods are used primarily for the insertion of ground combat troops. Drop pods can provide a benefit in combat operations by presenting multiple small targets as opposed to one big one, and also by strategically placing troops in specific locations. Flights are pre-programmed in at a console in the drop bay, and the actual launch is initiated by an officer who remains on the ship. The typical one man pod is a tight fit for a soldier with gear, and special interiors have been created for those wearing battledress. The military also use a non-occupied version of the drop pod, which replaces the passenger compartment with a storage compartment for pinpoint delivery of weapons, food, and supplies.

Non-military Use
A drop pod's primary non-military use is as a spaceship's emergency escape vehicle. Escape vehicles designed for 8, 12, or 16 passengers are more the norm, and much more economical. Still, if you have a small ship, or when you want to get off a ship fast and don't want to wait for other passengers, the single occupant pod is the way to go. The pod's launch sequence is tied directly into the ship's navigation computer, which automatically computes the safest trajectory and landing zone. This information is updated automatically by the ship's computer every five minutes, although the pilot or navigator can select different coordinates if desired. Non-military models typically contain an emergency vacc suit, emergency rations and supplies, and an automated tracking beacon.

Check out Twilight of the GM's excellent article "Abandon Ship", for more thoughts about escape pods.

Also take a look at Atomic Rockets well thought article on the folly of escape pods in the article "Emergency Deck". 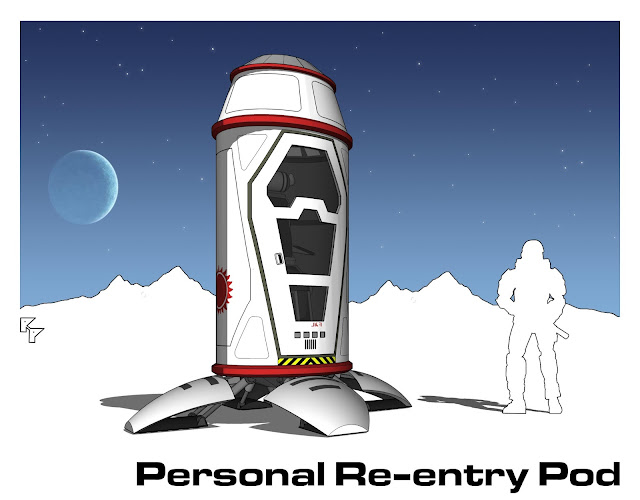 Below is a Drop Capsule geomorph, with a similar Pod Bay. It includes areas for the cap troops and a control center, from where the capsules are programmed and launched. In this scenario, even the sleeping quarters are pods - kind of like the Japanese capsule hotels. Maybe cap troopers are agoraphobes. 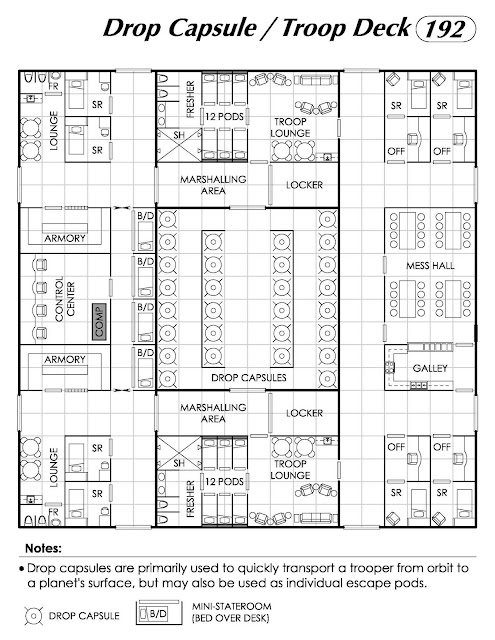 Posted by Robert Pearce at 1:50 PM